Malaria is a parasitic infection of the health of red blood cells. It is acquired via the bite of female Anopheles mosquitoes. The ecology of the disease is complex, depending on factors such as altitude, climate, mosquito breeding sites and human behaviour for successful transmission of the disease in an area.

There are four types of parasites namely vivax, malariae, ovale and Plasmodium Falciparum. Vivax, malariae and ovale can cause serious illness but seldom cause death in otherwise healthy patients. P. Falciparum on the other hand can cause cerebral malaria and ultimately death in a relatively short period of time if left untreated. Cerebral malaria and anopheles mosquitoes can be found in most African countries.

Where the disease occurs

For those travelling to many of the warmer regions of our world there may be a risk of contracting malaria. Each year this parasitic disease causes many deaths both in the tropics and among travellers returning to their home countries. Most of the transmission occurs in tropical Africa (approx. 95%) with the rest in Asia and Central & South America. Travellers need to remember that there is also a mild risk of the disease when visiting parts of North Africa and some parts of the Middle East.

Please refer to the MARA Malaria Map for South Africa

How is the disease transmitted

In the majority of cases the disease is transmitted to humans through the bite of an infected Anopheles mosquito. The parasite enters the blood and passes very rapidly into the liver cells. After an incubation period (usually 1 to 4 weeks) the parasite breaks out of the liver and back into the blood stream. At this stage the infected red blood cell begins to break down and only then does the patient start to develop symptoms. [The disease can also be transmitted through blood transfusion, infected needles and from an infected mother to her unborn baby.] 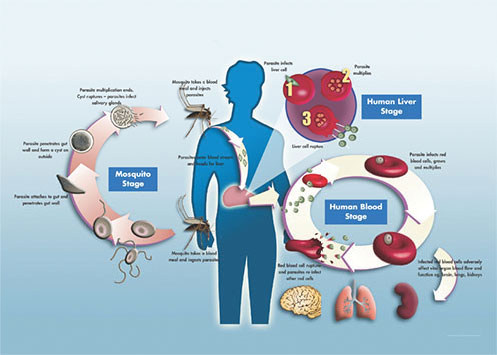 All age groups are at risk of being infected by malaria.

Initially the patient may develop an itchy reaction at the site of the mosquito bite. This is not always present and depends on the individual’s allergic reaction to bites. After the liver phase has passed, the patient may go on to develop the classical symptoms of malaria. The individual will usually feel they have flu. In many cases ill travellers will doubt that they have Malaria due to it’s flu-like symptoms.

The amount of parasites in a patient’s bloodstream will determine the level of illness he/she experiences. During an initial attack the symptoms are usually very definite and a clinical diagnosis may be quite straightforward so long as a history of international travel is obtained.

Young children, diabetic patients and the older age groups may present with changed symptoms which do not fit the ‘classical’ symptom picture. Patients who are pregnant or on other medications (steroids/antibiotics etc.) may not exhibit tell-tale symptoms either.

Although it is possible to test yourself for Malaria with a rapid finger prick test (Supplied by your Travel clinic or Pharmacist) one should bear in mind that finger prick test are NOT 100% accurate. This implies that a test might return a negative result, when you do in fact have Malaria. It is therefore important to continue testing every 4 hours if you continue to feel ill.

Ultimately the only certain way of confirming a malaria diagnosis is by confirming the parasite’s presence on examination of a patient’s blood under a microscope.

It is important to note that Malaria is the most commonly diagnosed disease in many African countries; it would therefore be wise to confirm results produced at a laboratory of questionable integrity. If a patient suffers from Malaria that patient’s white blood cell count will increase as the body attempts to fight the disease. It is therefore highly unlikely that a patient can suffer from Malaria without an increase in white blood cells.

To add weight to a positive Malaria blood smear patients should request a full blood count (FBC). If the white cells are on the increase it might well indicate the presence of Malaria.

It is essential that all travellers recognise that none of the malaria prophylactic tablets are perfect. Each of the drugs used have problems – either with ease of compliance or side effects of varying severity. Avoiding mosquito bites remains the cornerstone of protection against malaria. In most cases the mosquitoes which transmit malaria tend to bite during the evening hours once the intensity of the sun has lessened. At these times (between dusk and dawn) it is essential that travellers cover up well and use adequate insect repellent. [Insect Bites]

Various drugs are used to protect against malaria. As mentioned earlier none of these are perfect and they only start attacking the parasite after the liver stage of the disease life cycle has been completed. In all cases it is necessary to ensure that adequate blood levels of the drugs are maintained during exposure and for at least a full four weeks afterwards. [Malaria Prophylaxis]

It is essential that all travellers realise that malaria is a very serious disease. It can kill a patient very rapidly and as yet we have no vaccine against the disease. The primary responsibility for protection against the disease rests firmly with the individual traveller. The prescribed drugs may assist but they do not provide complete protection.v

If you think you have malariav

Remember that patients may develop malaria despite having taken all reasonable care with both personal protection against mosquito bites and prophylactic drugs. The disease may present many weeks or months after exposure. Certainly the disease has been initially seen many years after exposure in some patients.v

If you feel you may have malaria it is essential that you attend for detailed medical examination as soon as possible. Ensure that the medical staff realise your history of international travel to an at risk region of the world, either just recently or in the distant past.v

If you return from overseas and experience fevers, sweating, shivering, aches and pains and other flu like symptoms you should seek medical advice as soon as possible. Malaria can be a serious disease if left untreated. It is wiser to assume you have malaria until proven otherwise.v